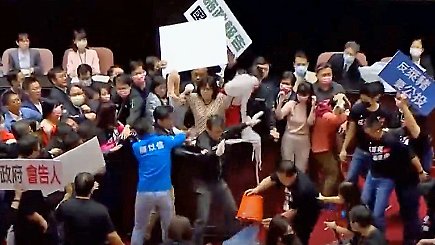 National Institute of Allergy and Infectious Diseases Director Dr. Anthony Fauci says he still believes that the coronavirus originated in nature but acknowledged he is keeping an “open mind.”

“We have an open mind but it looks very much like this was a natural occurrence, but you keep an open mind,” Fauci told Fox News Special Report host Bret Baier.

Baier pressed Fauci on emails showing that Fauci has previously dismissed the lab leak theory as a “shiny object” that will “go away” when discussing the origin with top scientists.

“Bret, I know you’re a good person,” Fauci responded. “I’ve known you a long time. If you take a group of emails where people are considering and thinking out and you stop there and don’t look at the weeks of careful examination by those same people that wrote the emails and then you say now that we’ve looked at it in the published peer review literature they explain very clearly why they think it’s a natural occurrence.”

Fauci added in the interview that “more people saying” that the virus originated in a lab “doesn’t mean there’s more evidence of it.”

Fauci has faced heated criticism from Republicans who have suggested a possible government coverup on the origins of the virus which many believe came from a lab in Wuhan, China and not an animal in nature.

Republican Sen. Rand Paul said on Fox News this week that if his party takes control of Congress in November that Fauci will be forced to testify under oath about the origins of the virus and gain of function research that Fauci’s office was reportedly conducting at the Wuhan lab.

“I do fully believe this virus, this pandemic that killed 6 million people around the world, leaked from the lab,” Paul said on America Reports. “But I think there was a concerted effort by him and his colleagues to cover this up and make sure it didn’t come to light, that the NIH was funding that lab and that there was reasonable scientific evidence that suggests that it came from the lab. So he’s going to be made to testify under oath. And I hope he sticks around because we do have some questions.”

Fauci, the highest paid employee in the federal government, revealed this week that he plans on retiring at the end of President Biden’s term.